Celtics out to put finishing touch on Heat, series 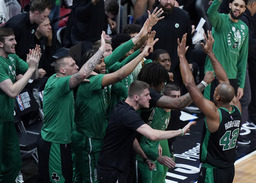 The Eastern Conference finals haven't been the most picturesque series, but it will look like a masterpiece to the Boston Celtics if they notch one more victory.

The Celtics will seek to reach their first NBA Finals since 2010 when they host the Miami Heat in Game 6 on Friday night.

Boston moved ahead 3-2 in the series with Wednesday's 93-80 win in Miami, using a 24-2 run in the second half as the knockout punch.

But nobody associated with the Celtics is ready to celebrate. The franchise has lost in its past four visits to the Eastern Conference finals and on two of the occasions, they let a 3-2 lead slip away.

One of those times was in 2018 when Jayson Tatum and Jaylen Brown were part of a team that saw the Cleveland Cavaliers win the last two games to go to the NBA Finals.

"Obviously, a different team now," Tatum said after Game 5. "I'm a lot better, J.B. is. We're just older. And we've been through those tough times."

Brown has a similar view and said now is not the time to relax.

"This is a great opportunity," Brown said. "Leave everything on the floor. You don't want any feelings of regret. We got an opportunity to do something with this group that's special.

"So let's not take that for granted. Let's come out Friday on our home floor, and play the best version of basketball we played all season. This is a big game for us."

Miami star Jimmy Butler had 13 points on 4-of-18 shooting while the club's backcourt put up enough bricks to build a condo on South Beach. Max Strus was 0-of-9, Kyle Lowry was 0-of-6 and Victor Oladipo was 1-of-7. Strus is 0-for-16 over the past two games.

"I've got to play better," said Lowry, who is dealing with a hamstring injury. "I (am) playing terrible. It is what it is. I'm out there, so I've got to do a better job."

Butler, playing with a sore right knee, also took responsibility for his poor play in the past two games. He is averaging 9.5 points and made just 7 of 32 shots during the span.

There could be help Friday if NBA Sixth Man of the Year Tyler Herro (groin) is cleared to play. Herro was listed as questionable on Thursday.

The Heat have been without Herro for the past two games. Miami averaged 81 points in the contests Herro missed.

"We are not making excuses for anything," Miami coach Erik Spoelstra said of his club's injuries. "We are not deflecting anything. We lost the game (Wednesday). We had a tough loss in Boston (in Game 4). We're still alive.

Miami led 42-37 at halftime on Wednesday before the Celtics outscored the Heat 32-16 in the third quarter to seize control.

Brown capped the surge with a 3-pointer as part of his game-high 25-point effort. Tatum narrowly missed a triple-double as he accumulated 22 points, 12 rebounds and nine assists.

Now the Celtics would like to ensure they don't have to head back to Miami for a Game 7.

"It's an elimination game, to have it on our home court is an advantage," Boston coach Ime Udoka said. "They beat us there already. So we have to come out with the same urgency after these last two wins and try to put it away."