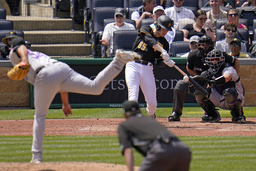 The 23-year-old flipped a full-count pitch just over the rail above the Clemente Wall at PNC Park in the sixth inning on Wednesday to erase a three-run deficit, the spark the Pirates used to rally for a 10-5 victory over Colorado.

A month into a call-up from Double-A to the major leagues born out of convenience more than anything else, Suwkinski has five home runs and leads National League rookies.

"He's got some thump, man. The kid can hit," said Pittsburgh second baseman Josh VanMeter, whose three-run homer in the seventh gave the Pirates some breathing room. "His numbers in Double-A before he got here were stupid."

Still, it's a massive jump from the Eastern League to the majors, one Suwinski has navigated by trying to keep his head down. While he's still hitting just .188 on the season, he's found a flair for the dramatic.

The Chicago-area native homered at Wrigley Field last week in front of his family, provided a small measure of solace in a bizarre 18-4 loss to St. Louis on Sunday by drilling one off Yadier Molina - that's not a typo - and turned what looked like Pittsburgh's fifth loss during a six-game homestand into its 10th comeback win on the season with one swing.

"It's definitely been a pretty crazy month, that's for sure," Suwinski said. "It's been great though, just the adjustment and learning and a lot of time to talk to some of the guys that are here and being able to learn from them."

Suwinski's learned so much that his No. 65 - a number typically reserved for relief pitchers or September call-ups - might be sticking around for a while. He showcased his maturity while stepping into the box against Colorado reliever Carlos Estevez with two on in the sixth.

The nine-pitch battle ended with Suwinski sending a 97 mph fastball just over the seats to set the stage for Pittsburgh's biggest offensive outburst of the season.

"This kid doesn't get rattled very easily," Pirates manager Derek Shelton said. "It was nice to see him get rewarded with the fruits of his labor."

Ben Gamel gave the Pirates their first lead in the seventh with an RBI single off Justin Lawrence (1-1) and VanMeter followed two batters later with his third home run of the year as Pittsburgh posted a season high in runs.

"You know, I think we've got a lot of good hitters," VanMeter said. "I (just) think we have a lot of unproven hitters. You know, that's just kind of like the nature of the beast."

Dylan Peters (4-2) retired the last two batters in the seventh for the victory.

C.J. Cron hit his 12th home run for the Rockies to pull him into a tie for the National League lead with Los Angeles Dodgers star Mookie Betts. Randal Grichuk went 2 for 4 with a double and three RBIs for Colorado, which has lost 13 of 18 following a 15-10 start.

Still, Colorado manager Bud Black was pleased with what he saw from the team's fourth-round pick in the 2018 amateur draft, particuarly after getting knocked around a bit in his previous start this season, a loss to Philadelphia last month.

"He's still finding his way, he is," Black said. "There's a learning curve here. A minor-league game is really different from a major-league game. But he has a good head on his shoulders and I think he's going to be fine in the long run."

ROCKIES: Placed OF Kris Bryant on the 10-day injured list retroactive to Monday with back soreness. This is Bryant's second stint on the IL this season due to back issues. He missed nearly a month after initially tweaking the back in late April. He returned for two games against the New York Mets last weekend before behind held out of the lineup on for the first two games in Pittsburgh as a precaution.

Pirates: OF Jake Marisnick (thumb surgery) appears to be ahead of schedule in his rehab. Marisnick was cleared to resume baseball activities on Monday. ... SS Kevin Newman (groin) hit a setback with his left hamstring while on a rehab assignment at Triple-A Indianapolis. There is no timetable for Newman's return.

Rockies: Begin a four-game series against the Nationals in Washington on Thursday.

Pirates: Head west for a six-game trip that starts on Friday in San Diego.