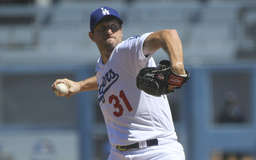 On a staff of aces, Max Scherzer stands out, and he will try to continue his perfect run with his new team as the visiting Los Angeles Dodgers look to rebound against the Cincinnati Reds on Saturday afternoon.

In his last start, which came Sunday against the Padres, Scherzer flirted with perfection and passed a significant milestone. He became the 19th pitcher with 3,000 strikeouts and had his bid for a perfect game broken up with a double by Eric Hosmer in the eighth inning.

Scherzer ended up allowing just the one hit with nine strikeouts in eight scoreless innings, throwing 92 pitches in an 8-0 win.

Scherzer will be facing the Reds for the second time this year. He took a tough-luck loss while with the Washington Nationals on May 25 at Nationals Park. The Reds got to Scherzer for two runs on five hits in seven innings in a 2-1 win.

The Reds counter with right-hander Sonny Gray (7-7, 3.80), who heads to the mound looking to rebound after his five-game win streak came to an end Sunday in a 2-0 loss to the St. Louis Cardinals.

Gray will be making his fourth career start against the Dodgers and second this season. He was tagged for two runs and four hits in 5 2/3 innings on April 28 at Dodger Stadium as the Dodgers pulled away for an 8-0 win and salvaged the final game of the three-game series.

The series could be a preview of a one-game wild-card showdown in the National League. Luis Castillo allowed five hits over 6 1/3 shutout innings and worked out of a first-inning jam on Friday.

"You knew runs were going to be hard to come by," Dodgers manager Dave Roberts said. "I think in its entirety recently we've been swinging the bats well, having good at-bats, team approach."

The Reds, winners of consecutive games for the first time since Aug. 26-27, won Friday's opener 3-1 thanks to two doubles from Kyle Farmer, a 2013 draft pick of the Dodgers. Most importantly, the Reds stayed one game behind St. Louis for the second National League wild-card spot.

"It was a big win, obviously. I love a lot of guys over there (with the Dodgers). They're great friends of mine, teammates and some of the best friends I've ever had. I love playing them, the intensity level. It seems a little different playing them.

Farmer played on playoff teams with the Dodgers in 2017 and 2018 and felt that atmosphere Friday night in the opener.

"I was fortunate enough to play in the playoffs with the Dodgers for two years, and this stadium was very loud and very similar to those atmospheres," Farmer added.

Second baseman Gavin Lux was a late scratch Friday when he was hit on the forearm by a ball from a pitching machine. Dodgers manager Dave Roberts said he hopes to have Lux available off the bench for the Saturday and Sunday games in Cincinnati. Roberts said X-rays were negative, and the injury is considered just a contusion.