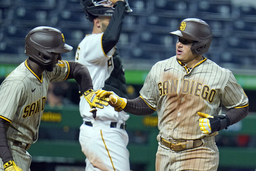 The San Diego Padres are finding different ways to win, to the tune of eight victories out of 11 games and four in a row heading into Tuesday's game against the host Pittsburgh Pirates.

The Padres have won twice by shutout during their four-game winning streak. They have totaled 13 runs in two of those games, and just five in the other two.

Wil Myers smacked a homer and tied his career high with five RBIs on Monday as San Diego posted a 6-2 win over Pittsburgh in the opener of the four-game series.

"Honestly, it's just me executing my plan," said Myers, who has a seven-game hitting streak and is batting .350 on the season. "Luckily, right now it's going well for me."

The Pirates were feeling good about themselves after answering a six-game skid by scoring 15 runs to win their last two contests against the Chicago Cubs.

That feeling lasted another five innings Monday, as Pittsburgh and San Diego were tied at 1 before the Pirates' bullpen surrendered five runs.

Padres starter Adrian Morejon, who left Sunday after three batters because of a forearm strain, has been put on the injured list.

That puts into question San Diego's starter for Friday against Los Angeles, but it isn't expected to change the plans for the rotation during the series in Pittsburgh.

Snell gave up four hits and two walks over 4 2/3 scoreless innings in his debut on April 2 against the Arizona Diamondbacks, but he didn't last long enough to get the win.

The 2018 Cy Young Award winner wasn't upset that he got pulled that early; he was upset that his pitch count (86) was that high.

"I've got to make better pitches and be a better starting pitcher and not put so many innings on the bullpen like I did," Snell said. "It's the first game -- I get that. But ... I've got to be better. I'm going to watch it and I'll learn, I'll grow."

Snell worked five innings in a no-decision against the San Francisco Giants on Wednesday.

He has faced Pittsburgh once while pitching with the Tampa Bay Rays. He surrendered six runs on four hits in five innings of a 6-2 loss on June 28, 2017.

That day, the first five Reds reached base against Kuhl.

"He's got to put the ball on the plate," Pirates manager Derek Shelton said.