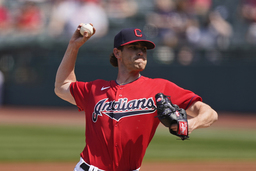 One week after earning his first victory of the season, well-rested Chicago White Sox right-hander Lucas Giolito is geared up to keep rolling Tuesday in a marquee pitching matchup against fellow ace Shane Bieber of the visiting Cleveland Indians.

Giolito (1-0, 4.22 ERA) navigated rough sequences in his most recent outing April 6 in Seattle, including a botched, would-be double play ball and a wild pitch in the Mariners third. He recovered to scatter three runs and four hits in 5 1/3 innings with one walk and 10 strikeouts.

"It was definitely a grinder effort," said Giolito. who is 2-2 (2.62 ERA) in seven starts against the Indians.

Bieber (0-1, 3.65 ERA) has contributed quality starts in each of his first two appearances this season, but the reigning American League Cy Young winner boasts little to show for it thus far.

Tuesday marks Bieber's third start against a fellow AL Central foe, as he previously has faced the Detroit Tigers and Kansas City Royals. The right-hander took a no-decision Wednesday in a home start against the Royals, allowing two runs on three hits with four walks and 12 strikeouts in 6 1/3 innings.

Bieber has recorded at least eight strikeouts in 14 straight starts, matching the team record set by Corey Kluber in 2017 and tied for the fifth-longest run in major league history. Bieber is 2-2 (2.94 ERA) is eight starts against the White Sox.

With one out and runners at first and second, Chang attempted to start an inning-ending double play, but his throw to second base hit Chicago's Yasmani Grandal in the back of the batting helmet, allowing Madrigal to score.

While Cleveland manager Terry Francona said Chang should have taken the sure out by tagging first base, he complimented a defensive play Chang made to start a double play earlier in the game.

Franmil Reyes went 0-for-2 while driving in a run on a sacrifice fly. Reyes has hit safely in seven of nine games to begin the season.

"Every time I'm facing any pitcher, it's totally different now how I see the ball travel more and recognize what is hanging, what is away, what is in," Reyes said. "It's unbelievable. It's a good feeling."

The White Sox are trying to keep an even keel after enduring numerous injuries and a sluggish start while navigating high expectations.

"We set lofty goals for ourselves in spring training, seeing the group that is in here, and unfortunately didn't get off to the start we needed," closer Liam Hendriks said. "When that happens you start to overanalyze, put way too much pressure on yourself, try to live up to what everyone said, and when it doesn't happen, it just snowballs.

"So right now we need to go back to square one as a group and take it game by game. We're not going to win the World Series now. Let's stop talking about it. Let's figure out how to win this series and let's go to war."

White Sox manager Tony La Russa said "our expectation is" Anderson will start against the Indians in the series finale Thursday afternoon.