Denver Broncos' head coach search starts out in the Midwest 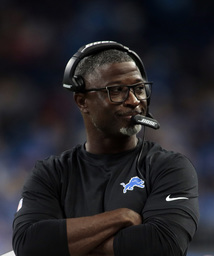 ENGLEWOOD, Colo. (AP) The Denver Broncos began their search for Vic Fangio's replacement in the Midwest, meeting with Detroit Lions defensive coordinator Aaron Glenn ahead of their trip to Green Bay.

Broncos general manager George Paton and a team of executives were meeting Friday with Packers assistants Luke Getsy and Nathaniel Hackett after spending time with Glenn on Thursday.

"I am so happy for him," Hackett, Green Bay's offensive coordinator, said of Getsy, the team's QBs coach and passing game coordinator. "I mean he deserves this opportunity, for his name to get out there because he's a great coach."

The Packers are off this week after earning the NFC's top seed with a 13-4 record behind another stellar year from Aaron Rodgers, who was linked to the Broncos last summer when the star quarterback's disenchantment with his team went public.

The sides patched things up, at least for him to play in 2021, and he threw for 37 touchdowns with just four interceptions in another MVP-worthy season. Last month, Rodgers said he hadn't ruled out anything for 2022, whether it be returning to Green Bay next year, trying to play elsewhere, or even retiring.

"I think that I'm just enjoying this season for this season," Rodgers said.

Adding either Getsy or Hackett might make Denver an appealing destination for Rodgers should he want to move on after 17 years in Green Bay much like Tom Brady did after his long stint in New England.

Also on the Broncos' list for interviews to replace Fangio, whom they fired Sunday after he went 19-30 in three seasons, are several assistant coaches whose teams are in the playoffs. That includes both of Mike McCarthy's top lieutenants in Dallas: offensive coordinator Kellen Moore and defensive coordinator Dan Quinn.

Paton also wants to speak with offensive coordinators Eric Bieniemy of the Chiefs, Brian Callahan of the Bengals and Kevin O'Connell of the Rams, Eagles defensive coordinator Jonathan Gannon and Patriots inside linebackers coach Jerod Mayo.

All of the candidates are at least a decade younger than Fangio, who was 60 when he was hired as a first-time head coach in 2019, and six of them - Moore, Callahan, O'Connell, Gannon, Mayo and Getsy - are in their 30s.

LaFleur said play-calling experience was vital to his own development, but he didn't believe coordinator experience was a prerequisite to become an NFL head coach.

"If you're alluding to Getsy, do I think he's ready? I think absolutely," LaFleur said. "... He's got all the qualities that you look for, I think, when you think about a leader."

Leadership is the top qualification that Paton said he's looking for in his head coach.

Fangio was notoriously dedicated to the defensive side in his three seasons in Denver, which ultimately led to his ouster as Pat Shurmur's stodgy offense and Tom McMahon's blundering special teams dragged down a team that never found a winning vibe under Fangio.

The Broncos have had 10 starting quarterbacks and no playoff appearances since Peyton Manning's retirement six years ago and are in the market for an upgrade at QB from Teddy Bridgewater and Drew Lock this offseason.

Hackett, who's also scheduled to speak with the Jaguars and Bears about their head coach vacancies, interviewed for the Falcons' job last year.

"It's not really as much Xs and Os as people would think," he said. "It's more just about kind of the person you are, how you would lead the team, how you would handle the team."

Bieniemy was a hot name in last year's coaching carousel, but never got an interview despite the Chiefs' consecutive trips to the Super Bowl behind Patrick Mahomes.

"I'm blessed and very fortunate to be part of that chatter and some of the things that are taking place," Bieniemy said, "but right now my focus is to make sure we're ready" to play the Steelers on Sunday.

Mayo played eight seasons at linebacker for Bill Belichick and has been on his staff for the past three years. He said he enjoyed laying out his football philosophies when he interviewed for the Eagles' opening last year and appreciates the interest he's drawn from the Broncos.

"It's a very humbling experience," Mayo said. "It's definitely a huge opportunity. Hopefully one day I get a chance to coach a team."