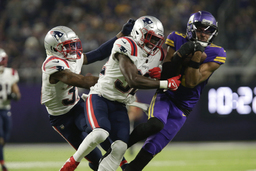 FOXBOROUGH, Mass. (AP) The most recent time the Bills faced the Patriots, they left little doubt about their status as the pacesetter in the AFC East.

Buffalo walked off the field with a 47-17 win in the wild-card round of the playoffs this past January, demoralizing a New England team that was celebrating being back in the postseason after a one-year absence.

The Bills (8-3) will look to add to their recent run of success in a rivalry once dominated by the Patriots (6-5) during their latest trip to New England.

Buffalo enters Thursday night's matchup the winners of three of the past four regular-season meetings and is in second place in the AFC's only division in which all four teams are above .500.

But it has yet to notch a division win with close losses to Miami and the New York Jets. Both setbacks were on the road, a fact not lost on quarterback Josh Allen.

"Division games, you got to win them," Allen said. "We know our record this year in them. It's not easy going on the road and playing in division games. We got to understand that and be ready for it again, a hostile environment."

For New England, which is coming off its best offensive performance since quarterback Mac Jones returned from an ankle injury, the approach has been to remember but not fixate on last year's playoff debacle.

"I'm not going to just dwell on something that's in the past, but it was definitely in my mind how we ended the season last year," running back Rhamondre Stevenson said. "I feel like we get to go out and put a different game on film."

Thursday's game will be the third in 12 days for the Patriots, coming off having their season-best three-game winning streak ended in a 33-26 loss on Thanksgiving at Minnesota.

Back in last place in the division, it's left little room for error with six games remaining.

"We're going to need to play our best game and that's what we're going to prepare to do this week," Patriots coach Bill Belichick said.

The injury bug has migrated around the Bills' defense this season. The latest to be affected is top pass rusher Von Miller after he was ruled out with a knee injury.

Miller leads the team with eight sacks, but left Buffalo's 28-25 win over Detroit on Thanksgiving. It creates a big hole for a unit that has allowed just 18.1 points per game this season, the fifth fewest allowed in the NFL.

Coach Sean McDermott acknowledged it will be one of their toughest adjustments yet.

"He's a future hall of famer for a reason," McDermott said. "That said, we've got to move forward this week. And the person or the people responsible to step in and step up have got to do the job, and that's the way it goes."

The news isn't all bad. Buffalo's other starting defensive end Greg Rousseau started the week as a full participant in practices after missing the previous three games with a high ankle sprain.

"We've got to hold together," defensive tackle Ed Oliver said. "Von did the same thing for us."

If the Patriots are going to snap their two-game losing streak to Buffalo, it may start with forcing the Bills to punt the ball.

"We went out there and it was negative-1 (degrees) and went out there and basically got our face kicked in," Patriots safety Adrian Phillips said. "It's a big deal, but at the same time you can't let that consume you. It's a whole new team, a whole different mindset."

Patriots team owner Robert Kraft interrupted McCourty's weekly news conference this week to present him with a photo collage in commemoration of what will be his 200th game for New England on Thursday.

The collage was made up of photos of McCourty from each of his previous 199 appearances for the Patriots over 13 seasons - all starts. It ranks third in team history behind only Bruce Armstrong (212 starts) and Tom Brady (283 starts).

"I came in here as a young pup and accomplishments didn't matter - individual accomplishments," McCourty said. "But it's been a heck of a journey. I'm enjoying every moment of it."

He's also still contributing in a big way, entering the week tied with Harrison Smith for the most interceptions among all active NFL players with 33.

The Patriots are 26-4 when McCourty has an INT in a regular-season game.